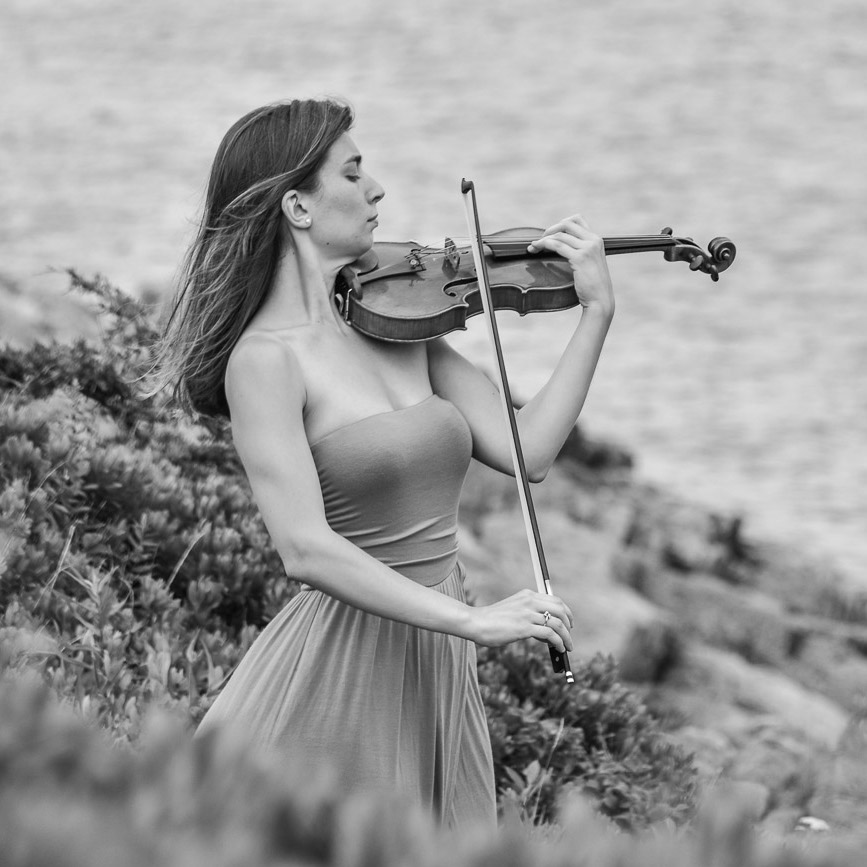 Violinist Aviva Hakanoglu was born and raised in New York City, and joined the Beo String Quartet in 2019. She is currently pursuing a Doctorate in performance at Stony Brook University, where she studies with Jennifer Frautschi, Philip Setzer, Arnaud Sussmann, and Hagai Shaham. Previously, Aviva was a member of the Steinem Quartet, which was selected for the inaugural class of the Emerson String Quartet Institute at Stony Brook. In addition to her studies on Long Island, Aviva was assistant director of the Three Village Chamber Players, a community-based chamber music collective that provided free concerts around the area.

Aviva received her Master’s degree from Indiana University studying with Simin Ganatra. While at IU, she was a participant of the Pacifica Quartet Intensive Seminar, and also held positions with the Owensboro and Terre Haute Symphonies. Additionally, she studied pedagogy with Mimi Zweig, and has since maintained an active teaching schedule.

During the summers, Aviva has attended festivals such as the Bowdoin Music Festival, Heifetz Institute, and Chautauqua Music Festival. She is also a violinist with the Pittsburgh Festival Opera. With Beo, she has held faculty positions at Dakota Chamber Music and the Charlotte New Music Festival. A passionate chamber musician, Aviva has collaborated and performed with renowned artists such as Atar Arad, Peter Stumpf, Larry Dutton, and Paul Watkins. Aviva earned her Bachelor’s degree in Philosophy and Music from Harvard University.

A native of Pennsylvania, Robert began his musical studies at an early age in piano and violin with faculty of Bucknell University.  He holds bachelors degrees in both math and music from the University of Rochester, and became interested in historical performance while exploring the harpsichord and baroque violin at the Eastman School of Music.

Upon graduating from Stony Brook, Robert was accepted into the Juilliard School's prestigious Historical Performance program with a full scholarship, continuing his harpsichord studies with Peter Sykes, Richard Egarr and Beatrice Martin.  During his two years at Juilliard he participated in projects led by William Christie, Jordi Savall, Ton Koopman, Masaaki Suzuki and other leading figures in the field of early music with frequent performances in New York City's Alice Tully Hall and international tours to the Netherlands and New Zealand. On top of his activities as a harpsichordist, Robert appeared on Baroque viola in many Juilliard concerts as well.

Robert has participated in most of the country's top early music summer festivals, including the American Bach Soloists Academy in San Francisco and the Oregon Bach Festival's Berwick Academy.  He has also been selected to participate in harpsichord masterclasses with Davitt Moroney, Trevor Pinnock and others.  Robert now resides in New York City where he continues to be an active performer, appearing with ensembles including Bach Vespers at Holy Trinity, Academy of Sacred Drama, Three Village Chamber Players, North Shore Pro Musica, Noise Ensemble, and Melius Consort.  He is the founder, artistic director and harpsichordist of New Amsterdam Consort as well as a founding member and harpsichordist of Musicivic Baroque and Voyage Sonique.

Micaela Fruend Haimov is a Long Island based violist and chamber musician. In recent years, she has performed at Carnegie Hall with New Music for Strings Festival Orchestra, at the Women Composers Festival of Hartford, at University of Tennessee- Knoxville’s Contemporary Music Festival, and has collaborated with members of the Emerson String Quartet at Stony Brook University. Micaela toured with Four Seasons Chamber Music Festival’s Next Generation concert series in 2015 and 2019 and has attended festivals such as Astona International Summer Music Academy and Madeline Island’s Fellow String Quartet Program. A committed music educator, Micaela has spent past summers as a coach and mentor at chamber music programs in both New York and North Carolina.  Haimov graduated with her Doctorate of Musical Arts degree from Stony Brook University, where she studied with Lawrence Dutton, Nicholas Cords, and Matthew Lipman.